For a couple of decades between 1930 and 1950, the modern polygamists enjoyed relative unity and expansion. John Y. Barlow died on December 29, 1949, leaving Joseph Musser to preside over the eleven-member Priesthood Council and a few thousand followers. Within three years, Musser’s leadership decisions would divide the fundamentalists forever.

Musser Presides and the Fundamentalists Split

Shortly before Barlow’s death, Musser experienced a stroke and called upon polygamist naturopath Rulon Allred for medical care. After joining the fundamentalists in 1935, Allred had made a favorable impression on Barlow, who ordained him to special work within the group. Musser was also impressed with Allred and despite his stroke-induced handicaps, ordained Allred on September 18, 1950, saying:

“I have prayed concerning this matter for a long time and thought somewhat of calling my son Guy as my Second Elder, but I was not impressed to do it. I am going to ordain you to that calling.” Musser then arose from his bed, placing his feet on the side and told Rulon to kneel down close to him. Placing his hands on Rulon’s head he pronounced a blessing: “Brother Rulon C. Allred, by virtue of my Apostleship, I lay my hands upon your head and set you apart to be my First Counselor and to stand at my side as Hyrum stood to Joseph and as Leslie [Broadbent] stood to Lorin [Woolley].[1] 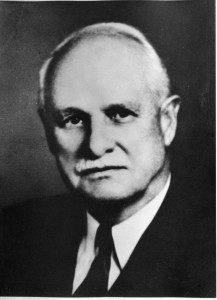 Ultimately, the council members rejected Allred as anything more than a private counselor to Joseph Musser who would be released at Musser’s death. In response, in January of 1952, Musser released all the members of the Priesthood Council previously called by John Y. Barlow. Importantly, he utilized his position as the “senior member” of the council to call and set apart seven new members: Rulon C. Allred, Elsie Jensen, John Butchereit, Lyman Jessop, Owen Allred, Marvin Allred, and Joseph B. Thompson, as replacements. Lorin C. Woolley’s High Priest Apostles Charles Zitting, LeGrand Woolley and Louis Kelsch were left in limbo.

In Musser’s eyes these seven men comprised the true Priesthood Council, displacing the old council members who had opposed him. Accordingly, members of the old council were expected to follow the new Priesthood Council that Musser had just assembled. In August, Musser affirmed: “Whatever his former council did, was without authority from now on, unless he [Musser] sanctioned it and then it is done by HIS authority, not their own” (emphasis in original).[2]

Understandably, old council members refused to be released even though Joseph Musser supported only the second, newer group. Even his own son, Guy Musser, opposed him saying: “Brother Allred is a devil. He has tried for the last fifteen years to split up the Priesthood. My father is incompetent and is not able to give any man the Apostleship. Rulon has not got it. All that follow R. C. Allred, work under a spurious Priesthood and all his work done is unauthorized. . . . Some of the brethren have tried to put me next to father, but I am seventh in the line down. My father cannot bypass his whole Council and put someone else ahead. . . . The Council of the Priesthood is united in its stand against Brother Allred.”[3] 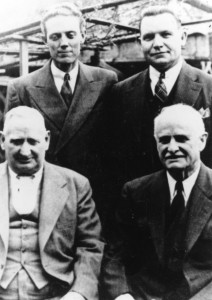 Fundamentalists in Salt Lake City split their support about 50-50 between the two Priesthood Councils. However, the Short Creek polygamists were unanimous in sustaining the older council. Musser, accompanied by new council member J. Lyman Jessop, visited Short Creek in July of 1952. Meeting with Leroy Johnson, Richard Jessop, and Carl Holm of the old council, Lyman Jessop recorded: “Brother Joseph [Musser] asked Roy [Leroy Johnson] to state how he felt toward him, so Roy said that he knows that Joseph holds the keys to the Priesthood and he [Roy] will sustain him in that position in love and loyalty.” Then Johnson stated: “I stood by John [Barlow] until the end. I will support you as I did him.”[4]

Musser requested that a meeting be held, and he be allowed to address the Short Creek fundamentalists. Despite the allegiance previously professed, Leroy Johnson refused, saying, “We are under covenant to do what we are doing and we cannot change from that course and we have no arguments to make.” Musser was greatly disappointed and replied, “Well, you just as well go your way and we’ll go our way.”[5] Privately Johnson confided: “If the Lord wants to use an incapacitated leader to lead some people astray, that is the Lord’s business.”[6] The two Priesthood Councils and the polygamist “groups” that followed them were officially divided. Joseph Musser journeyed north to Salt Lake City, never again to return to Short Creek.

Mid-July 1952 saw a very unique situation in the history of Mormon fundamentalism. Three separate Priesthood Councils could be identified, and all three essentially operated independent of each other. 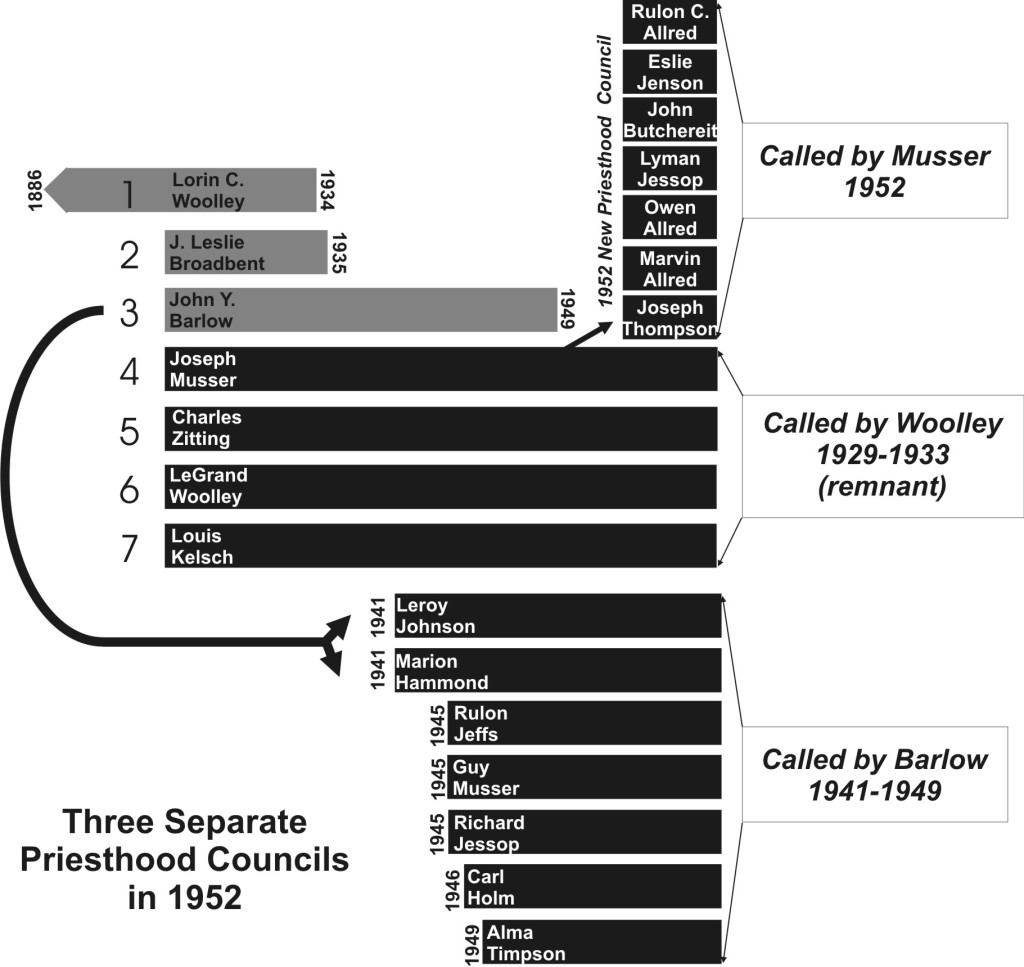 Joseph Musser passed away on March 29, 1954. From the standpoint of seniority, Charles F. Zitting presided, but he had never asserted himself as a presiding leader, having accumulated some wealth and ten wives, he remained aloof from the United Effort Plan and many of the other projects promoted by Barlow and Musser. Regardless, Zitting himself died just a few months later on July 14. At this point, two of Lorin Woolley’s High Priest Apostles were still living, Legrand Woolley and Louis Kelsch, but both refused to assume leadership of the polygamists. This left Leroy Johnson presiding with the Barlow-appointed Priesthood Council in Short Creek, and Rulon Allred firmly in control in the Priesthood Council chosen by Musser. These and other modern polygamists are explores in essays in the “groups” section.