Of all the gospel principles restored through the Prophet Joseph Smith, plural marriage was perhaps the most novel. While serving as an apostle, Gordon B. Hinckley wrote: “Mormonism claims to be a restoration of God's work in all previous dispensations. The Old Testament teaches that the patriarchs—those men favored of God in ancient times—had more than one wife under divine sanction. In the course of the development of the Church in the nineteenth century, it was revealed to the leader of the Church that such a practice of marriage again should be entered into.”[1] 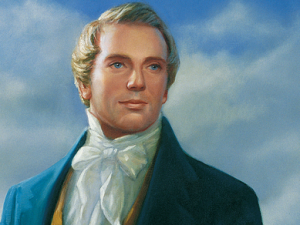 Precisely when Joseph Smith learned of the correctness of plural marriage is not known. He translated the Book of Mormon in 1830, which states: “For there shall not any man among you have save it be one wife; and concubines he shall have none. . . . For if I will, saith the Lord of Hosts, raise up seed unto me, I will command my people; otherwise they shall hearken unto these things” (Jacob 2:27, 30). While specifying monogamy, this statement leaves the door open for future polygamy should God see fit to allow it.

It appears that sometime shortly after the Book of Mormon was published, Joseph Smith learned that plural marriage was a true doctrine and would eventually be practiced by Church members. In 1831, Joseph revised the Bible noting the accounts of the ancient patriarchs who practiced polygamy. Abraham was married to Sarai (Sarah), Hagar (Gen. 16: 1–3), and concubines (Gen. 25:6). Jacob (renamed Israel by God) had twelve sons by four wives. Moses too was a polygamist (Ex. 2:21 and Num. 12:1). Early Church member Lyman E. Johnson recalled that “Joseph had made known to him as early as 1831 that plural marriage was a correct principle.”[2]

Evidence suggests that Joseph Smith attempted one plural marriage during the 1830s, to Fanny Alger in 1835-36. However, it wasn’t until the early 1840s that the Prophet would try again. Joseph B. Noble claimed that he was first introduced to the subject by Joseph in the fall of 1840, when the Prophet asked him to perform the first plural sealing in Nauvoo the next year. Between 1841 and 1844, Joseph Smith married additional wives and authorized others to do so.[3]

The Keys of Sealing Restored 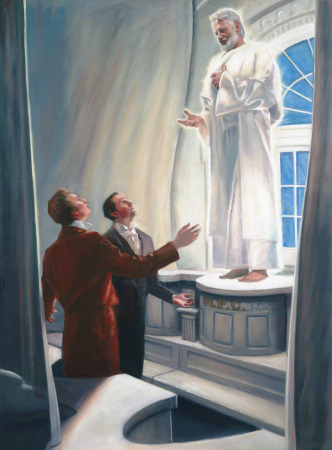 Elijah appearing in the Kirtland Temple

The Prophet wrote: “It may seem to some to be a very bold doctrine that we talk of—a power which records or binds on earth and binds in heaven. Nevertheless, in all ages of the world, whenever the Lord has given a dispensation of the priesthood to any man by actual revelation, or any set of men, this power has always been given. Hence, whatsoever those men did in authority, in the name of the Lord . . . it became a law on earth and in heaven, and could not be annulled, according to the decrees of the great Jehovah” (D&C 128:9).

Joseph Smith insisted that the sealing authority is tightly controlled by the key holder. An 1843 revelation clarified: “There is never but one on the earth at a time on whom this power and the keys of this priesthood are conferred. . . . Behold, mine house is a house of order, saith the Lord God, and not a house of confusion” (D&C 132:7–8; italics added). It also pointed out that even if the proper language is used and both individuals are sincere, marriages performed without proper authorization of the “one” are “not valid neither of force when they are out of the world” (D&C 132:18). In studying the claims of Mormon fundamentalists, the issue of priesthood keys cannot be over-emphasized.

According to D&C 132:7, 18, 19, the authority of the “one” man is absolutely necessary, in all cases, in all places throughout the world. The “one” man may commission other men with authority to seal, but they are always subject to the keys that he holds. “It is necessary to know who holds the keys of power, and who does not, or we may be likely to be deceived,” taught Joseph Smith.[4] The “one” man regulates the sealing of both monogamist and polygamist marriages because both types of marriages utilize the very same keys. There are no specific keys of sealing for monogamist marriages and no separate set of sealing keys for plural marriages. Both types of marriages involve the very same authority. Plural marriage requires the repeated use of that authority, in each instance, sealing one woman to one man in eternal matrimony.

On one occasion, associate President of the Church Hyrum Smith proceeded to seal a couple without his brother’s consent, Joseph being absent from Nauvoo at the time. Brigham Young later referred to this occasion saying that no one could “act on the sealing principle only as he was dictated by Joseph. This was proven, for Hyrum did undertake to seal without counsel.”[5] When the Prophet returned and discovered what had occurred, he strongly cautioned Hyrum saying that if he ever did it again, “he would go to hell and all those he sealed with him.”[6] Joseph annulled Hyrum’s actions and later resealed the couple. LDS scholar, Andrew Ehat observed: “This early experience with regard to the authority to perform marriage sealings . . . illustrates the exclusive authority that Joseph Smith held: That certain of the presiding keys of the priesthood were not to be delegated.”[7]

Hyrum would later teach “No marriage is valid in the morn of the resurrection unless the marriage covenant be sealed on earth by one having the keys and power from Almighty God to seal on earth as it shall be bound in heaven.”[8] In 1845, Brigham Young would further clarify: “Joseph said that the sealing power is always vested in one man, and that there never was, nor never would be but one man on the earth at a time to hold the keys of the sealing power in the Church. That all sealings must be performed by the man holding the keys or by his dictation, and that man is the President of the Church.” [9]

The moment Brigham Young heard of Joseph Smith’s June 27, 1844 death, he was in the East doing missionary work. “The first thing that I thought of was whether Joseph had taken the keys of the kingdom with him from the earth,” Brigham remembered. “Brother Orson Pratt sat at my left; we were both leaning back in our chairs. Bringing my hand down on my knee, I said, ‘the keys of the kingdom are right here with the church.’”[10] Benjamin F. Johnson recalled the meeting where the Prophet charged the apostles with bearing off the kingdom:

At one of the last meetings… in the presence of the Quorum of the Twelve and others who were encircled around him, he arose, gave a review of his life and sufferings, and of the testimonies he had borne, and said that the Lord had now accepted his labors and sacrifices, and did not require him longer to carry the responsibilities and burden and bearing off of this kingdom, and turning to those around him, including the 12, he said, “And in the name of the Lord, Jesus Christ I now place it upon you my brethren of this council and I shake my skirts clear of all responsibility from this time forth.”[11] 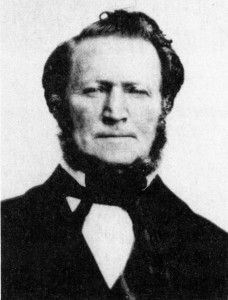 Brigham knew that he held the priesthood keys, along with the other members of the Quorum of the Twelve, and that he, as the senior apostle, presided. Brigham Young had been specially prepared by Joseph Smith to lead. Just a few months earlier, in January of that year, the Prophet instructed Brigham regarding the administration of the highest temple ordinances and then authorized him to administer them to other members of the quorum even though the Nauvoo Temple was not yet completed. Consequently, the Quorum of the Twelve was the only presiding priesthood quorum that had received all temple ordinances. Brigham explained: “No man can put another between the Twelve and the Prophet Joseph. Why? Because Joseph was their file leader and he has committed into their hands the keys of the Kingdom for all the world.”[12] In 1848, President Young taught: “No man was ever ordained to any higher order than an Apostle – and that Joseph Smith never received any higher ordination.”[13]

During the two years after the Prophet’s death, the number of plural marriages expanded five-fold, involving up to 10 percent of all Latter-day Saints. Once the westward migration was well underway, most Church members were aware of the doctrine. In 1852, Brigham Young announced to the world that plural marriage was a doctrinal tenet of the Church and that Latter-day Saints were expected to obey it. Practicing it by proper authority was paramount. No freelance plural marriages were permitted. Joseph Smith had instructed: “All the ordinances, systems, and administrations on the earth are of no use to the children of men, unless they are ordained and authorized of God; for nothing will save a man but a legal administrator; for none others will be acknowledged either by God or angels.”[14]

Brigham Young followed this council strictly. W. W. Phelps was sent on a mission in 1847. While serving in the eastern states, he married three wives polygamously. However, Phelps’s mission companion, Henry B. Jacobs, performed the marriages without having first obtained permission from President Young. Upon returning to Salt Lake City with the three women as new wives, Brigham Young heard the story. Hosea Stout, an attorney and police officer in Nauvoo and Winter Quarters, noted:

Went to a council today which had been called to investigate the cases of H[enry]. B. Jacobs and W. N. Phelps [sic] while they were East on a mission.

It appeared that Phelps had while East last summer got some new ideas into three young women and they had consented to become his wives and got Jacobs to marry them to him in St. Louis and he lived with them as such all the way to this place. After a long and tedious hearing of the matter which was altogether their own admissions, President Young decided that Phelps had committed adultery every time that he had laid with one of them.[15]

Phelps was excommunicated on December 6, 1847. This account demonstrates that even though W. W. Phelps was sincerely trying to follow Church teachings regarding polygamy, his plural marriages were unauthorized and therefore considered adulterous by Brigham Young.

During the first three decades of living in the Rocky Mountains, polygamous unions expanded as did the persecution from the federal government. President Young passed away on August 29, 1877, and a few weeks later in October general conference, John Taylor was sustained as President of the Quorum of the Twelve, the presiding apostle on earth. The next day he taught: “You voted yesterday that the Twelve should be Prophets, Seers, and Revelators . . . this is embraced in the Apostleship, which has been given by the Almighty, and which embraces all the keys, powers and authorities ever conferred upon man.”[16] President Taylor presided until his passing on July 25, 1887.