During the 1920s, hundreds of dissenters from the LDS Church gathered into specific groups across the Wasatch Front. Among the participants was Charles W. Kingston. Charles Zitting (one of Lorin C. Woolley’s High Priest Apostles) introduced Kingston to plural marriage, causing Kingston to be cut off from the Church in 1929. Two weeks after is excommunication, Kingston had a dream wherein he believed he was visited by Jesus Christ and God the Father. He interpreted his dream to mean that God approved of his leaving the Church. While his children and wife initially resisted his new religious position, they eventually joined him in asking their names to be removed from LDS Church records.

While Charles W. Kingston was the first to oppose the Church, the primary mover in the Kingston Group was his son Elden. Elden theorized that living the law of consecration was still required, and he set forth to establish his own united order organization. While engaged in that enterprise, he reportedly received an angelic visitation. His father wrote:

Brother Elden received a new covenant up on the top of the highest mountain that is east of Bountiful, Utah. When the Lord chose Brother Elden through which to send this new covenant, all other covenants were thereby dissolved. This means all other covenants were of no effect through which source they can. (The Church lost its authority to give covenants.) . . . Satan will try to stop the power of the Lord and that power is where the Lord has given his covenant of consecration and that is: to the Davis County Co-op of Bountiful, Utah. It is the power of God through the law or covenant of consecration given to Brother Elden in 1935.[1]

The Church . . . lost the priesthood which had come down to them from the Prophet Joseph Smith. . . . Brother Elden had received a new dispensation of the gospel of Jesus Christ. . . . [The Lord] had to institute another New and Everlasting Covenant which he gave to another 25 year old boy on the highest mountain east of Bountiful on the first day of the year, 1935. . . . Elden received the covenant of consecration and also the plan of temporal salvation.[2]

Accordingly, Elden became the first prophet of the Kingston Group and established the Davis County Cooperative Society. The Co-op members practiced plural marriage and abided by a rigid hierarchy of leadership and deference. 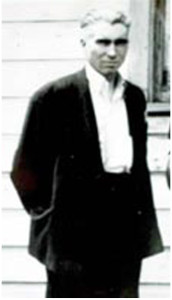 Precisely where Elden obtained valid priesthood authority is a matter of dispute. Elden’s father related that Elden told him that was ordained by J. Leslie Broadbent (Lorin Woolley’s successor) in 1934, although precisely what that ordination represented is unclear. Kingston members today generally claim that keys were received anew from heavenly messengers directly to Elden in 1935, although it appears he left no formal testimony to that effect. LDS scripture teaches that “in the mouth of two or three witnesses shall every word be established” (D&C 6:28; 2 Cor. 13:1). Elden’s solo experience of receiving the priesthood keys and authority is truly singular and contrasts the pattern previously given by the Lord for important priesthood conferrals that require more than one witness.

Believing that Elden received lost priesthood keys in 1935 also seems to contradict an 1837 scripture given to Joseph Smith stating that the priesthood had then (in 1837) been restored “for the last time”: “For unto you, the Twelve, and those, the First Presidency, who are appointed with you to be your counselors and your leaders, is the power of this priesthood given, for the last days and for the last time, in the which is the dispensation of the fulness of times (D&C 112:30; see also D&C 27:13). According to Kingston teachings, this scripture should not be taken too literally, and all of the efforts commenced through Joseph Smith came to a dead halt in 1934, thereby necessitating Elden Kingston to initiate a new dispensation. Elden clearly claimed to hold the priesthood keys, saying, “I have those keys of power.”[3]

The Kingston’s claim that Elden received a new dispensation is problematic in another way. The word “dispensation” refers to two processes. First, the truth and the priesthood keys are dispensed from heaven to a prophet on earth. Second, that prophet organizes his followers into missionary forces that dispense the truth to all the world, utilizing the priesthood to perform saving ordinances. If somehow a new dispensation came through Elden Kingston in 1935, it was stillborn, because it was never dispensed to God’s children. The Kingston Group stopped proselytizing new converts when the cooperative became successful, and today they perform no missionary work of any kind. 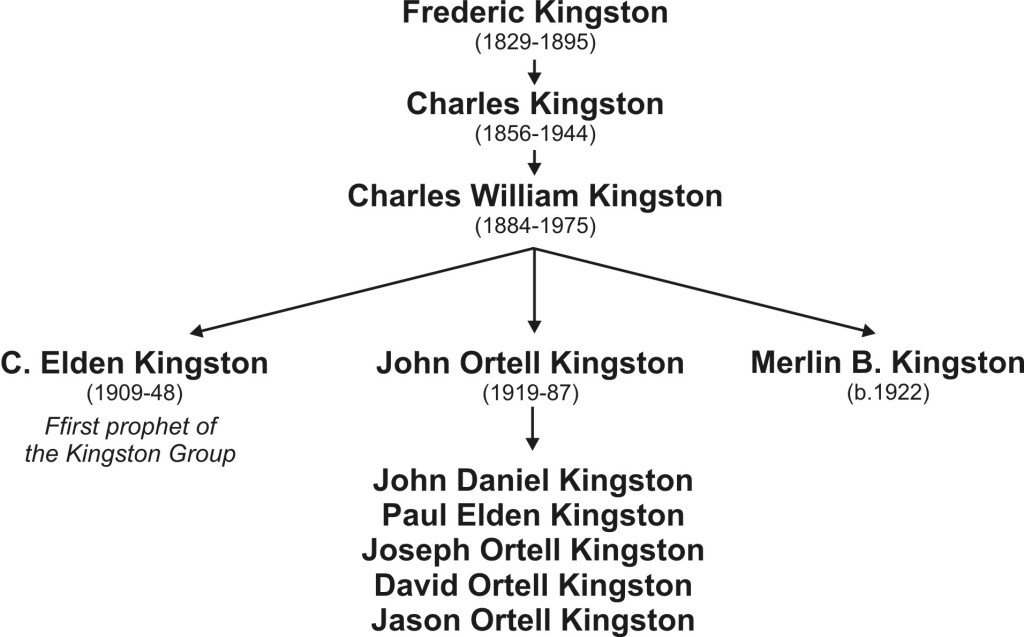 Through diligent money management and hard work, the Davis County Cooperative Society became very financially successful. In the 1940s and 50s, Kingston followers designed and wore unique outer garments, the wearing of which led other people to refer to them as “blue-coats.” Men and boys wore a blue coverall-type suit tied with strings, while women and girls wore plain blue dresses. As a symbol of their renunciation of worldly goods, the outer clothing contained no pockets in which possessions could be carried, although later an inside pocket was provided for the sanitary measure of carrying a handkerchief. All went bareheaded and barefoot.

Elden passed away from cancer in 1948 and was succeeded by his brother John Ortell Kingston (commonly known as Ortell). During the 1940s, Ortell worked on a dairy farm owned by the Co-op at Woodscross, Davis County, Utah, where he reportedly developed theories on genetics, theories he later decided could be used to purify his own family pedigree. Connie Rugg, one of Ortell’s plural wives remembered: “[Ortell Kingston] experimented inbreeding with his cattle and then he turned to his children.”[4] Ortell desired to perfect his own bloodline and implemented practices that encouraged marriages of close relatives. Those unions fell within Utah’s consanguinity restrictions and, if discovered, would be considered incestuous under the laws of the state. Several charges of incest would eventually be leveled against various Kingston members. 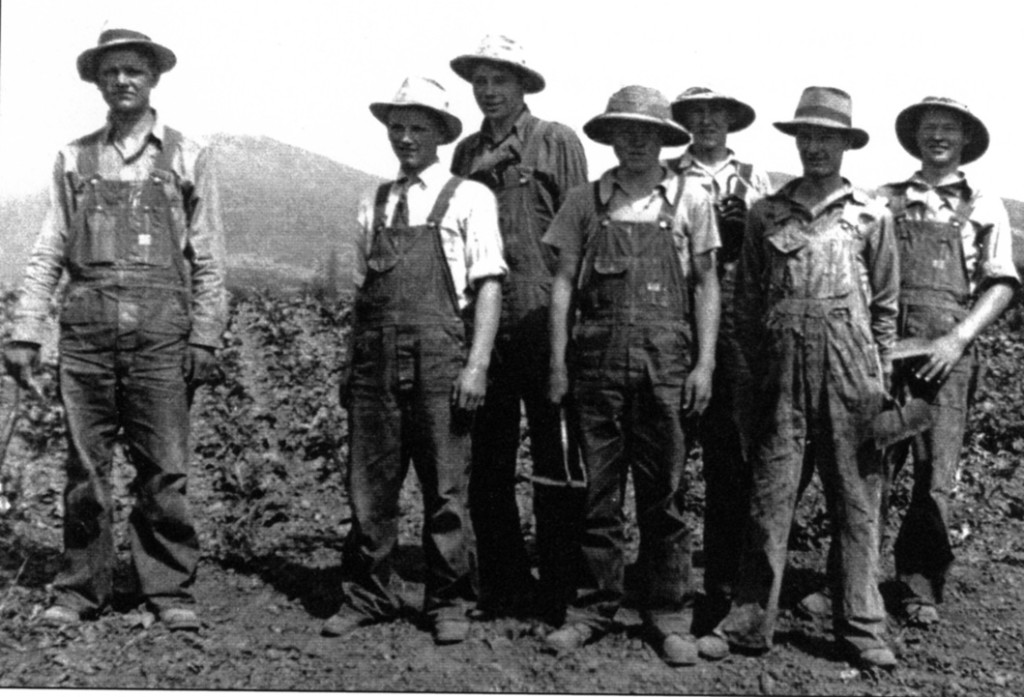 In the 1940s, members of the Co-op wore blue bib overalls

The Doctrine and Covenants admonishes the Saints to “look to the poor and the needy, and administer to their relief that they shall not suffer” (D&C 38:35). We specifically read that the law of consecration is designed “to administer to the poor and the needy” (D&C 42:35). “And it is my purpose to provide for my saints, for all things are mine. But it must needs be done in mine own way; and behold this is the way that I, the Lord, have decreed to provide for my saints, that the poor shall be exalted, in that the rich are made low” (D&C 104:16). 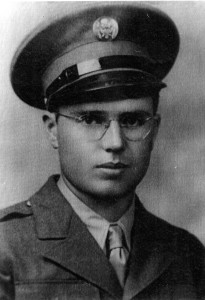 A brief review of the accomplishments of the Co-op produces an impressive spreadsheet with assets in excess of $200 million. But it is unclear how such assets are exalting the poor or making the rich low. In fact, the leaders of the Co-op just seem to be getting richer and the poor get essentially ignored. It may be that the Co-op is trying to help the poor in some anonymous way, but I have seen no evidence of it. In addition, placing the law of consecration at the pinnacle of divine laws is inconsistent with scripture and restoration history. We recall that Joseph Smith made no effort to implement the law of consecration while in Nauvoo (see D&C 105:34). Brigham Young waited until 1868, twenty-one years after arriving in Utah, to actively promote it, and John Taylor ceased emphasizing it shortly after becoming President of the Church.

Some Kingston followers might justify their financial conglomerate by comparing it to the wealthy Church of Jesus Christ of Latter-day Saints. It is true that the LDS Church has collected tithes and offerings in the millions of dollars over the past decades. But rather than amassing a fortune for the sake of accumulating wealth or to simply sustain a few selected leaders, donations flow into the Church coffers and out again to provide financial support for the accomplishment of the Church’s responsibilities regarding missionary work, temple work, and providing for physical welfare needs.

Upon Ortell’s death in 1987, leadership passed to his son Paul Elden Kingston. Paul continued to practice his father’s ideas regarding intra-family marriages. Daughters of men in the Co-op would be married off at young ages. LuAnn Kingston, a former member of the clan who in 1995 at age fifteen was forced to marry her first cousin, shared: “The joke used to be that if you weren’t married by 17, you were an old maid.”[5]

Within the Kingston Group, the primary polygamists are the immediate Kingston family and heirs. Reportedly, Paul and his brother each have dozens of wives and hundreds of children. One brother, John Daniel Kingston, was taken to court for neglecting this children. When asked to name his offspring by plural wife Mattingly Foster, Kingston came up with about five names before faltering, saying he was “very nervous.” After viewing a list of the children, he then attempted to name them but once more fell short—prompting the judge to supply the final child's name for him. Kingston was able to name only nine of his thirteen children by a second woman, Rachael Ann Kingston. “Sounds like I left a few out,” he said after being reminded of how many children he had fathered in that family.[6]

The Kingstons represent an intriguing branch on the Mormon fundamentalist tree. While they affirm that they now carry the torch first lit by Joseph Smith, their agenda focuses only on plural marriage and their own brand of united order. The Prophet Joseph’s priorities of missionary work, temple ordinances, proxy work for the dead, and feeding the poor appear to have been lost somewhere. Early persecution seems to have conditioned Kingston leaders to maintain the utmost secrecy, but third generation officers seem to use ignorance as a tool to enhance control of their followers, especially of women. With the dawn of the twenty-first century, lawsuits and education among Kingston followers would combine to create new obstacles, as leaders perpetuate this financially spiritual hybrid organization.

For a more detailed view the the Kingston's history see Modern Polygamy and Mormon Fundamentalism: The Generations After the Manifesto (Salt Lake City: Greg Kofford Books, 2006). A recently created critical website can be viewed at www.kingstonclan.com.