The LeBaron polygamists broke away from other Mormon fundamentalists in 1955. Prior to that time, they had loosely associated with John Y. Barlow and later Rulon Allred. LeBaron theology is distinct from all other fundamentalist factions in that they believe that the “one” man holding the keys of sealing does so by virtue of a priesthood office unheard of prior to 1955, the office called “the Right of the Firstborn.”

The theology is rather complex, but asserts that “the Right of the Firstborn” presides over all priesthood and over the church patriarch, who in turn presides over the First Presidency. 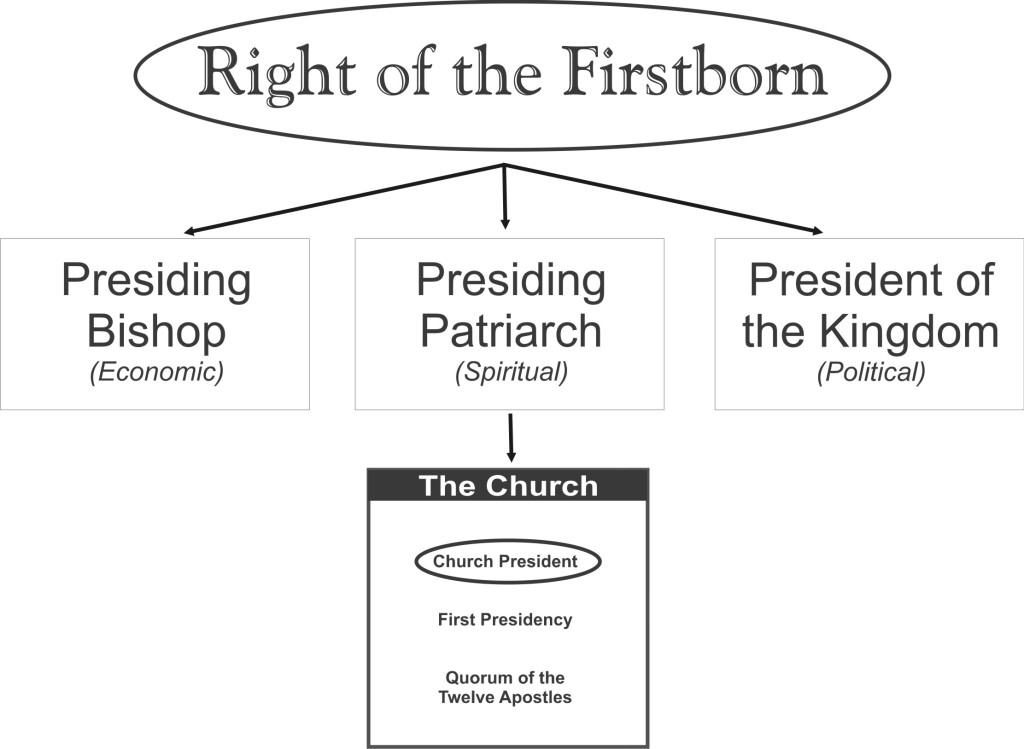 The term is found in Abraham 1:2–3 where Abraham writes: “I became a rightful heir, a High Priest, holding the right belonging to the fathers. It was conferred upon me from the fathers; it came down from the fathers, from the beginning of time, yea, even from the beginning, or before the foundation of the earth, down to the present time, even the right of the firstborn, or the first man, who is Adam, or first father, through the fathers unto me” (italics added). According to LeBaron teachings, the “Right of the Firstborn” means “the right to stand in the stead of the firstborn in His absence; the firstborn being Christ.”[1]

Reportedly the first man to hold this position in this dispensation was Joseph Smith. This office was then to pass to “his posterity after him” based upon a novel interpretation of a scripture talking about the building of the Nauvoo House—D&C 124:56–60. Regardless, the LeBarons hold that none of Joseph Smith’s posterity actually received the office, but instead it went to Benjamin F. Johnson, who they allege was an “adopted son.” There is no evidence that Johnson was adopted by the Prophet, or that he ever believed himself in possession of such a lofty office and responsibility. 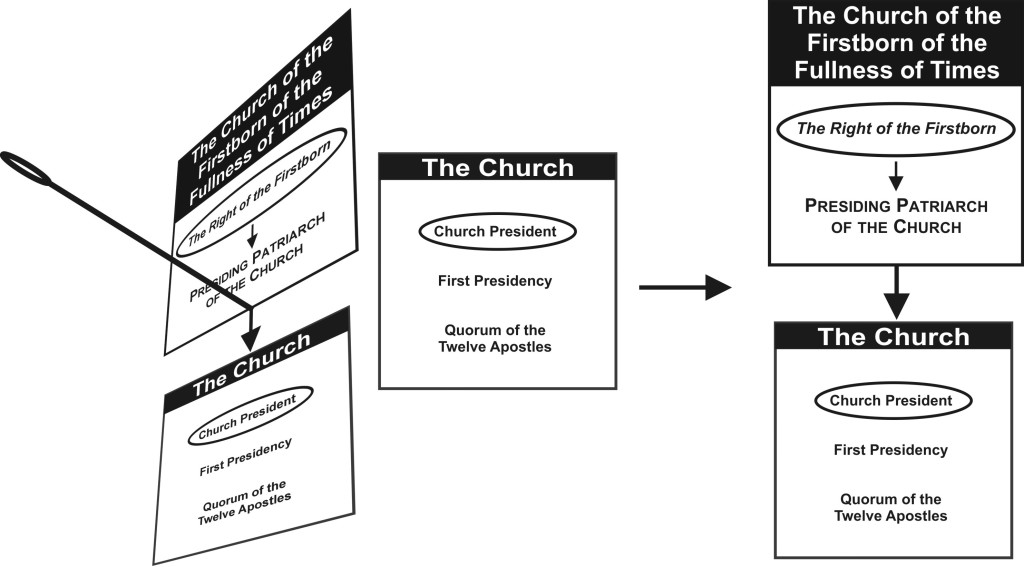 At any rate, LeBaron fundamentalists assumed that shortly before Benjamin F. Johnson’s death on November 18, 1905, he bypassed all eighteen of his own sons who were then alive in order to ordain one of his one hundred and five grandsons also living at that time. That chosen grandson was reportedly A. Dayer LeBaron. Ervil LeBaron penned: “Shortly before the death of Benjamin F. Johnson, he called his grandson, Alma Dayer LeBaron Sr. . . .  He gave him many instructions and said to him: When I die, my mantle will fall upon you.”[2]

Curiously, Dayer LeBaron left no testimony that he possessed any special priesthood authority. Regardless, sometime before his death, LeBaron polygamists believe he gave his keys to one of his sons. Ben seems to have the most legitimate claim because he was the firstborn. Reportedly he once stopped traffic in downtown Salt Lake City while he did two hundred pushups to prove that he was the “one mighty and strong” (from D&C 85:7). Ben spent most of his life battling mental illness.

Other accounts discussing Dayer’s priesthood keys written years after his death assert that they were given to Joel. Similarly, Ross Welsey claimed that he was ordained by his father Dayer LeBaron some months prior to his father’s death. Later both Ervil and Verlan would assume to hold the described office of the “Right of the Firstborn,” although years before Verlan LeBaron had approached Rulon C. Allred to perform his sealing to a plural wife.  Sons Alma, Floren, and David never claimed their father’s alleged authority.

Sometime in the early 1950s, Joel LeBaron resorted to the mountains, seeking answers to specific prayers regarding the “one mighty and strong” mentioned in D&C 85:7. In response, he described receiving a visitation from heavenly messengers: “They talked to me as plain as you and I are talking together. I now know the exact pattern to be used in setting the house of God in order.”[3] In August of 1955, Joel visited Salt Lake City and, accompanied by his brothers Ross and Floren, proceeded to organize his own church, “The Church of the Firstborn of the Fulness of Times.” 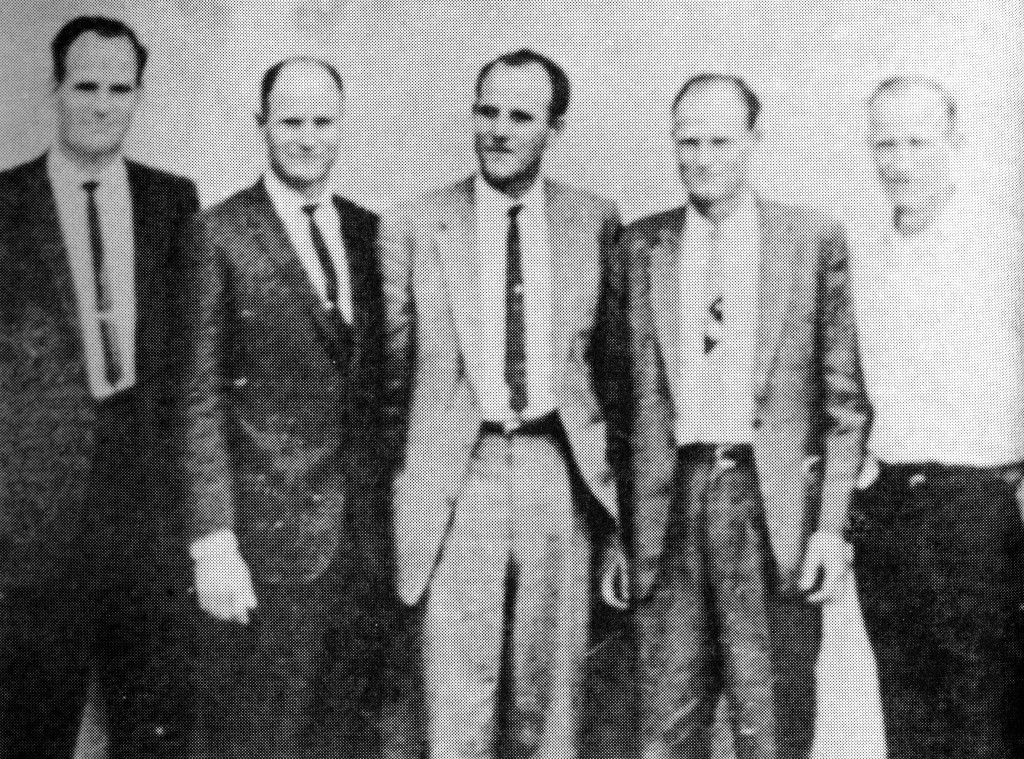 Once the church was organized on September 21, 1955, baptisms and confirmations followed that very same day. The new church boasted three members, but its leaders expected many more to soon join. The LeBaron teachings suggest that The Church of Jesus Christ of Latter-day Saints “was established to prepare the saints for membership in the Church of the Firstborn.”[4] At the urging of his brother Floren, Joel sought a secluded corner in a canyon above Salt Lake City. Then prayerfully seeking a confirmation of his calling, he reported receiving a “personal visitation from no less than nineteen prophets, including Abraham, Moses, Christ, and Joseph Smith.”

Within months of the organization of the Church of the Firstborn of the Fulness of Times, disagreements arose causing Joel and Ross to part ways. On December 1, 1955, Ross Wesley LeBaron incorporated his own church calling it simply “The Church of the Firstborn.” During the ensuing decades, Ross remained in Utah and quietly promoted his own church, cultivating a small group of followers. When asked in an interview on July 25, 1959, concerning his priesthood authority, Ross stated that he was “ordained by his father in March, 1950, and that Joseph W. Musser confirmed the patriarchal Priesthood of Dayer LeBaron the same day.”[5]

Initially Ervil LeBaron was one of Joel’s greatest disciples, however, by mid-May 1971, Ervil claimed his own revelation telling him to start his own church, and he organized the “Church of the Lamb of God. Subsequently he and Dan Jordan were excommunicated from Joel’s church. The family matriarch, Maud LeBaron, wrote a letter to Ervil stating: “Your father came to my bedside last week and asked me to help remove the sorrowful condition,” but even her intervention was ineffective is stemming the tide of Ervil’s darkening intentions.

Disputations between the brothers led Ervil to seek Joel’s death, perpetrated by Dan Jordan on August 20, 1972. Verlan was next in Ervil’s cross hairs, but after several years and multiple failed attempts to kill him, Ervil concocted an elaborate plan. He demanded that Rulon Allred tithe to him, and when Rulon refused, Ervil dispatched two of his young wives to shoot Allred in his doctor’s office. Ervil was certain that Verlan would attend Allred’s funeral, and there Ervil’s assassins could gun him down. Allred was killed, and Verlan did attend the funeral, but the media and law enforcement officers were too thick and his hit men bolted. Ervil was extradited to Utah and convicted of Rulon Allred’s murder, dying in prison in 1981.

Besides the lethal drama accompanying much of the LeBaron history, significant problems exist in their theology. The essentially “made-to-order” design of the line of priesthood authority proclaimed by LeBaron factions might seem to legitimize their claims. A closer look demonstrates that the offices and teachings greatly contrast Joseph Smith’s revelations and instructions. Foremost, the Lord tells us twice in section 132: “My house is a house of order” (D&C 132:8, 18), and order is lacking. The theological discrepancies seem insurmountable to objective reviewers.

[1] Ervil LeBaron, Priesthood Expounded (Buenaventura, Chihuahua, Mexico, 1956), 8:19. (Divided into Section and Verse by Thomas J. Liddiard March 1988.)  Contrast with Abraham 1:3, which indicates that the “Right of the Firstborn” refers to Adam.